Aren’t there enough metal libraries out there??

When I started working on “Metal Groans & Slams” the original intention was to simply gather some unique sounds for my personal library.

After the earlier recording sessions with metal poles and bins I realized my foot wouldn’t have been the first foot to kick a metal trash can on the planet.

If I wanted to gather unique sounds, I would have had to either find and capture unique sources or develop a unique way to record ordinary props.

Ironically, some of the first sounds that ended up in the library were recorded in one of the noisiest places on earth, Boston.

While walking a busy street near the southern station of the city, I stumbled upon an interesting looking sculpture:

Luckily I had my contact mics with me, which adhered perfectly to the bronze surface of the gong.

Once all mics were attached, I started hitting the structure with light strikes. It felt like playing one of the coolest percussive instruments on the planet.

Each spot on the sculpture would generate completely different sounds from the previous one, with really unpredictable resonances through the whole spectrum.

I ended up moving the mics a dozen of times, to finally settle on the base of the cone at the center of the sculpture.

Some of the sounds I gathered on that last spot made me think of a really fat pan drum, very relaxing and pure sounding tones.

I would then discover that the sculpture was made by David Bakalar in 1989 and was named “Life Force”.

I felt bad for having spent 1 hour gently slapping “Life Force” in what looked like the slowest and most uneffective act of vandalism in history.

I then found out there are 7 “Life Force” scattered around the globe and I intend to gather the sound of the remaining six. Possibly without ending up with a torchlight on my recorder and a worried police man asking “What is that?!” the next times though.

I thank my super “field recording” instructor Curtis Wright for teaching me that a Fostex FR2 is never too big not to fit in a suitcase, even though it clearly is.

With some cool sounds in the pocket I went back to Italy for a two weeks holiday before returning to London where I work.

Spending some of that time near the border with Switzerland helped me gather more juicy content for my library.

The things that I love about the Alps are the silence, the silence and the cheese. Some of these areas are so quiet one could almost record anything with a great signal to noise ratio, a good reason to keep the recorder close all the time.

During one of our field trips we found a really old cable car in front of an abandoned building which looked something like this: 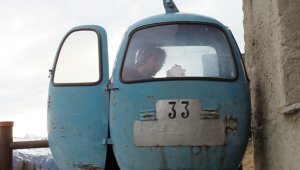 The cable car, along with some very nice metal sheets found along the way, made for some versatile metal impacts, which I really wanted to have as base of my library.

Part 3 – Recording in a Busy City and building props.

Once I returned to London it didn’t take me long to realize that great sources would have stopped materializing themselves before my eyes.

I started thinking about simple ways to get interesting sounds out of more or less ordinary props so that I could gather sounds in more or less any situation.

The first experiment consisted in buying a couple of clamps and a bass strings set.

It surprised me to discover how many props are actually suitable for transformation into a string instrument. The combination of an ordinary metal sheet and a bow can provide incredibly rich and gritty tones, allowing for crazy bending on top of that! 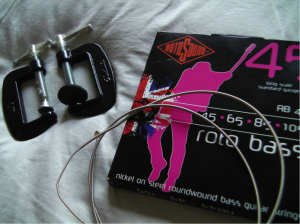 This method is what allowed me to record most of the groans that you will hear in the library.

The use of contact mics on the resonating source made for some really large groans that I believe would work as a layer of a huge creature’s voice.

Lastly, some impacts were also recorded by plucking the untightened strings for really interesting resonances.

After the first recording sessions I introduced another element to the experiment, milk frothers! 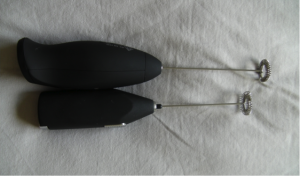 These are a very cheap way to get interesting sounds, especially when combined with a vibrating string on a metal object.

Having a pillow wrapped around the small motor will allow you to record the friction created their spinning head without any bleeding from the mechanism.

Changing the spinning pace of the tool with your hands will give you greater control over the sound, but it’s also likely to lead to a premature death of the frother, which is why you see two in the picture.

To wrap up the library with a grand finale I decided to try and implement an idea that I had a long time ago but never had the time to try.

The idea consisted in creating a feedback loop in between a contact microphone and a vibration speaker by applying both on the surface of a vibrating object.

Imagine a spring reverb, but in this case the loop is a closed circuit where 100% of the signal travels from one end to the other and actually feeds itself at the point that the original impulse that triggered the signal becomes null.

The object would end up resonating at its own frequencies, it would literally trigger itself with its own sound.

While setting up the experiment for the first time on a metal barrel, I wondered if any feedback loop would have taken place at all. Maybe higher frequencies would have taken over the loop, resulting in a horrible, piercing tone.

With the contact microphone taped to the barrel, I started moving the contact speaker on the object’s surface with one hand, controlling the feedback loop’s volume with the other.

After the first five minutes, interesting sounds started to play and morph as I moved the speaker around the edges of the canister.

Imagine yourself being a doctor and asking a metal barrel to cough while moving your stethoscope around its surface: that’s how weird that day was.

While the first recording session seemed to be a success, listening back to the material got me thinking the system could have been improved massively with the use of a more appropriate microphone for capture and possibly, some control over the pitch of the loop.

After some weeks, I went back to the barrel, armed with my MKH8040, a slammy pedal and all of the tools I used in my previous experiments, here is a picture of the happy family. 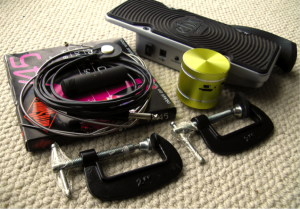 After this last recording session I finally edited all the material together and there you have it, “Metal Groans and Slams” was finally done.

I am still thinking about ways to improve my recording techniques and come up with more ideas to overcome the limitations of living in a city.

That said, I’m quite happy and moderately proud of this library and hope you’ll find inspiration by reading of a guy that spends his days slapping a large bronze sculpture (who wouldn’t).

I’d like to wrap this up by thanking everyone that supported me by getting my first two libraries and motivated me to keep going and record more stuff.

More unique moments shall be recorded, more techniques shall be developed, until then, enjoy the sounds 🙂